“With his own instrumental design, compositions of just intonation with 43 unequal intervals, and his own rhythmic patterns, Harry Partch (1901-1974) was utterly original and a musical explorer of new sonic frontiers. These new recordings, a Grammy winner in 2015, make use of reproductions of his instruments (the originals are museum pieces) and presents three theatrical pieces in their entirety for the first time. The package notes include Partch’s own descriptions of his work. The first score, Castor & Pollux, because of its bouncy percussion, odd timbre, and sheer cheer, has been performed by several dance groups, including Mark Morris. Ring Around The Moon has various dance names assigned to each scene, such as samba, rumba, Afro-Chinese minuet, conga, and Tahitian dance, but it is tenuous musical association and almost word play, as the vocalized text. The piece is fun. Even Wild Horses is an exciting dance that employs all the instruments of the “Partch” ensemble: marimba, zithers, plucked and bowed string (altered guitar and viola), chimes, chromelodeon, gongs and bowls, and saxophone. For all its wild sounds and inconsistent rhythms, there is actual method to the madness, and the music should be taken as a flow and in its entirety. The vocalist Paul Berkolds deserves special mention; his deep baritone lends gravitas to the English and French Dada-esque and poetic lyrics. The piece is fully dramatic in tone, with quiet passages and crescendos, mystery and joy. The final track is a recording of Harry Partch himself introducing these theatrical pieces. It has been a long time since I heard the sounds of Harry Partch, and I am very glad that the ensemble Partch is reintroducing Harry Partch’s music to audiences. Over the decades, our ears have adjusted to avant-garde and New Music, and Partch is no longer strange.” (Dr. Debra Jan Bibel)

1. Castor & Pollux – A Dance For The Twin Rhythms Of Gemini
2. Ring Around The Moon
3. Even Wild Horses – Dance Music For An Absent Drama 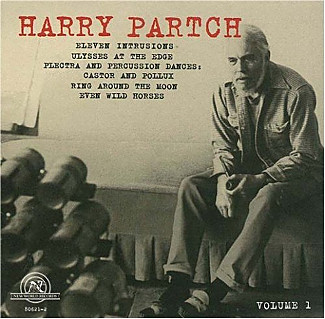