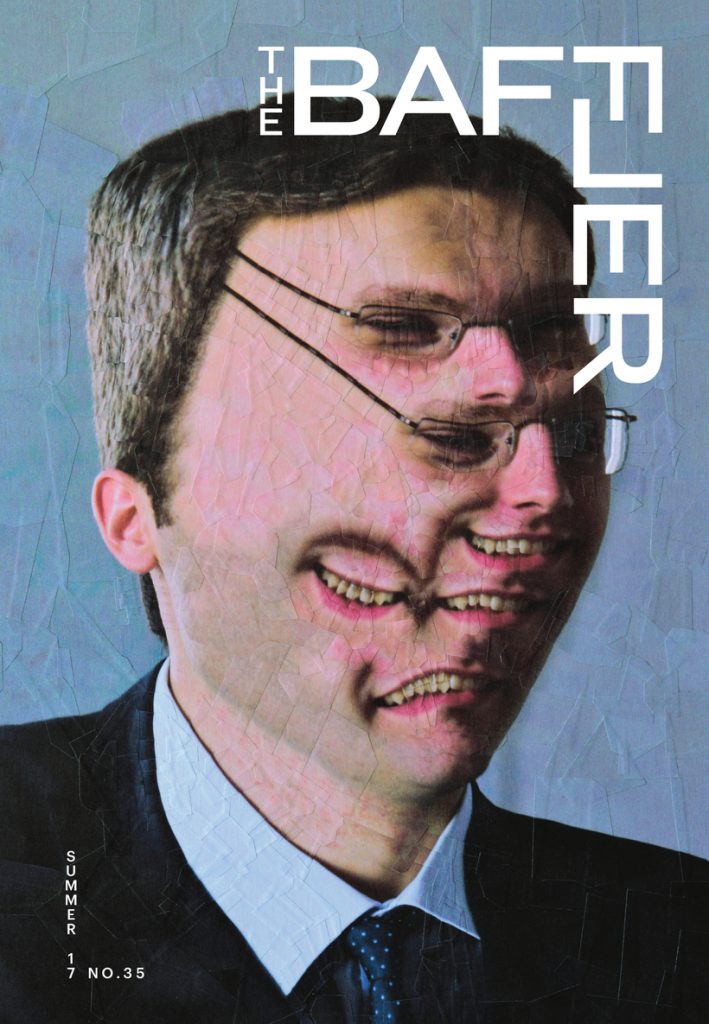 The Baffler is America’s leading voice of interesting and unexpected left-wing political criticism, cultural analysis, short stories, poems and art. About # 35, the editor writes:  “In The Baffler’s frisky nineties youth, we’d designate the liberationist delusions of consumer capitalism under the running designation “New Bad Things.” This casual filing system seemed well suited to an age that was tricked out in every conceivable sort of lifestyle novelty. But the New Bad things have lately mutated out of control. In a few short political generations, Lyndon Johnson’s bold vision of the Great Society has ceded the field to its photographic negative; we are now marooned in the sprawling wasteland of the Bad Society.

How did we get here, exactly? That’s what this thirty-fifth Baffler is determined to explain. Starting with our rancid head of state, Kimberlé Williams Crenshaw dissects the racist logic behind Donald Trump’s rise to power—a tale in which liberal fables of “colorblindness” play no small part. Adele Stan takes a close look at the networks of private capital that allow our Trumpian overlords to ransack the public weal with impunity. James Livingston chronicles the way that American culture has yoked itself to the work ethic, even at the moment when all the basic conditions of industrial-age labor are obsolescing before our eyes.

Perhaps, then, we are at last free to pursue glorious, self-determined leisure of the kind that Marx and Engels extolled in The German Ideology? No such luck, Miya Tokumitsu reports: the American romance with leisure is a rote and joyless affair, resembling nothing so much as the drudgery of the shop floor. Our cinemas and streaming set-top boxes offer no relief, notes Tom Carson: the superhero sagas now stoking the culture industries are studies in social fatalism. And as Ann Friedman reminds us, blue-state secession efforts are only cruel delusions.

What, then, is to be done? Far be it from Team Baffler to prescribe a reformist blueprint, but if we were to make a start, we could do worse than to build on the researches of our contributors by resisting the various best-case scenarists still contaminating our civitas. Heed our own chastened editorial history, and remember that bad things can always get worse.”

for the exact contents of this issue, look here.